History: The 1950s - A Time of Change in Education

The late 1950s - the time of our founding - was an exciting period in the history of higher education in Canada. More students were going to university than ever before. In fact, enrolment was expected to double by the following decade - an unprecedented amount of growth. Students were enrolling in record numbers because they were witnessing the link between postsecondary education and scientific and economic advances. Some would argue that the launching of Sputnik 1, the Soviet space satellite, prompted this realization, symbolizing Cold War competition in advancing science and technology. It was a catalyst for change, and from it stemmed a great wave of planning for university expansion and growth. Since most universities were reticent to expand, the only alternative was to create more universities - and hence the birth of York University. We are frequently referred to as the first of this new crop.

The Birth of York

York was incorporated in 1959, with the biggest task ahead being the actual development of the University, particularly its future character.

After much deliberation by York's Board of Governors, it was decided that the University would consist of a residential college, known as Glendon College; an evening college for part-time adult students from different backgrounds, generations and socio-economic circumstances, known as Atkinson College; and a large, urban, multi-Faculty campus that would eventually accommodate 7,000 to 10,000 students, known today as our Keele campus.

The Keele site was considered an ideal location for a campus because it was believed that the movement of population in Toronto would be towards the northwest, and it would be accessible to future main traffic arteries. Originally, it was estimated that enrolment would reach 7,000 students by 1980. That projection was later increased to 15,000. However, by 1980, actual enrolment was 25,000 students. When York first opened the focus was on liberal education in arts and science, and by the late 60s there was talk of adding three additional Faculties: education, engineering and medicine.

While education ended up being the focus, the aspiration to expand into professional education like engineering and medicine was reflected in all of York's strategic plans.

We have 25 interdisciplinary and collaborative research centres, with strengths in vision and space sciences, history and refugee studies, health, the environment, climate change, sustainability and digital media. We have ten faculties offering more than 5,000 courses, and more than three-million people visit our libraries annually. Our intellectual, cultural and social life at York is one of the richest in Canada, with more than 300 student clubs and organizations.

York has established its reputation worldwide with 200+ partnerships with international universities, attracting international students with roots tracing back to 178 countries.

Our distinctive and collaborative approach prepares students for the future and brings fresh insights and solutions to realworld challenges.

Tentanda Via: The Way Must Be Tried.

York U at a Glance (PDF) 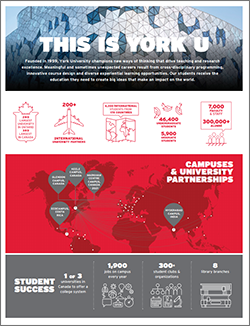